St.  Joseph’s square is located on 5450 Kaye Street in the heart of the Hydrostone District.

Fun Fact: Hydrostone District consists of 10 short parallel street where all are boulevards except Stanley street

Halifax Hydrostone was born out of crisis, in the aftermath of the Halifax explosion. The Halifax Explosion rocked Halifax and was heard all the way in Boston. The explosions devastated the North End of Halifax. The explosion gave birth the Hydrostone district and the neighbourhood was completed in the 1920. The same architectural theme is carried on throughout the Hydrostone district will slight variations on its inspiration, an English –style garden suburb. The design of the neighbourhood was develop according to the most up to date yet practical principles of town planning. Mainly housing displaced working class families from the Halifax explosion.

Concrete block that is finished with crushed rock (granite was used for this neighbourhood) This gave the appearance of cut stone construction. The concrete blocks and their faces were amalgamated through a hydraulic pressing process.

In memory of the beautiful gothic church and as cultural displays, the original 1960’s church stone, the corner stone and three stained glass windows depicting the impact of the explosion were salvaged and incorporated into SJS building design.

The adaptive reuse of these heritage materials is held in trust for the benefit of present and future generations as follow:

Three of these windows are displayed here representing 3 moments of time during the Halifax Explosion. 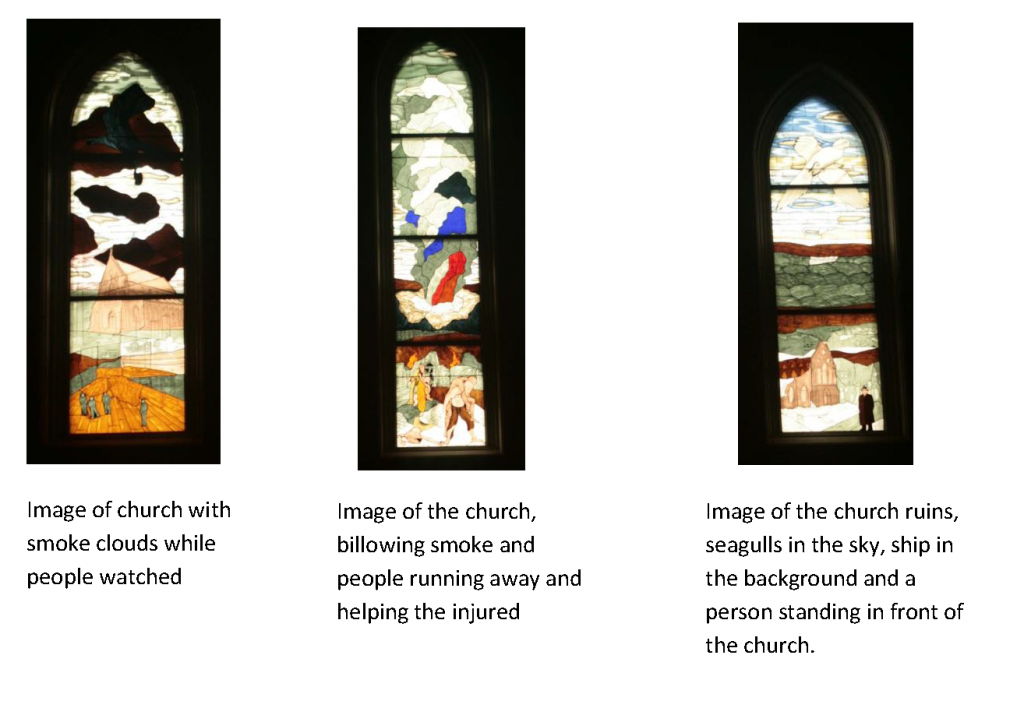 These materials possess heritage value in their own right and have historical, cultural and architectural significance for the North End community and the city of Halifax.

For a better view, switch to landscape mode on your device.